“We’re delighted with the process and outcomes, and the support provided by 4aBetterBusiness and Element ID, as impressive as those results are, we’re especially pleased with the way the process developed the engagement and buy-in of our employees.  This will enable ICM to sustain those gains and achieve ongoing improvements in performance and profits.”

ICM Products (ICM) is a specialty chemical company producing an industry-leading array of chemical compounds including silicone polymers, defoamers and specialty emulsions for a wide variety of applications.  The company has grown through acquisition from a single US location to an international company with operations in the US, England, Italy, and China.

ICM Products has experienced significant expansion through acquisitions.  The complexity surrounding integrating the new operations was made more difficult by a lack of data automation, automated workflows and product visibility.  On-time delivery had slipped to 50%.

To get operations firmly on track, ICM engaged 4aBetterBusiness, an implementation-based consultancy that deploys proven strategies to help companies improve productivity, cut costs and increase profits. 4aBetterBusiness identified multiple areas in which ICM could make improvements, and worked side-by-side with management and employees implementing those changes.  The changes improved on-time delivery to 86% within 5 months.

ICM was still manually entering data into its Sage X3 system, compromising efficiencies and introducing the opportunity for data entry errors.  Closing transactions could take from several days to a week.  Inventory counts were unreliable.  Without adequate real-time visibility into stock levels, higher levels of stock had to be maintained, and frequent schedule changes were required to accommodate materials availability.

To address these issues for the next stage of improvement, 4aBetterBusiness identified the use of bar codes / RFID to automate capture and processing of the data, and use of the Automated Data Collection (ADC) module of the Sage X3 module as effective solutions.   From discussions with a number of potential providers regarding bar code / RFID implementation, Element ID stood out with their focus on improving business results (not just implementing technology) and prior experience working with X3 partners.

Toward the end of the year, ICM needed to carry out a full inventory of ICM’s facility, including weighing of each of the thousands of containers in the production and warehouse areas.  After a trial inventory proved out the approach to be used, the full inventory was scheduled for 3 weeks after the trial’s completion.

Recognizing a major opportunity for ICM, 4aBetterBusiness President Paul Vragel proposed that all of the product in the warehouse be barcoded when it was handled, warehouse locations be identified and laid out, and the company start using barcode / RFID scanning immediately at the conclusion on the inventory.   New CEO Levi Cottington and CFO Tom Gawlik agreed that this was the right opportunity to introduce barcoding technology – if all the work could be done in time. 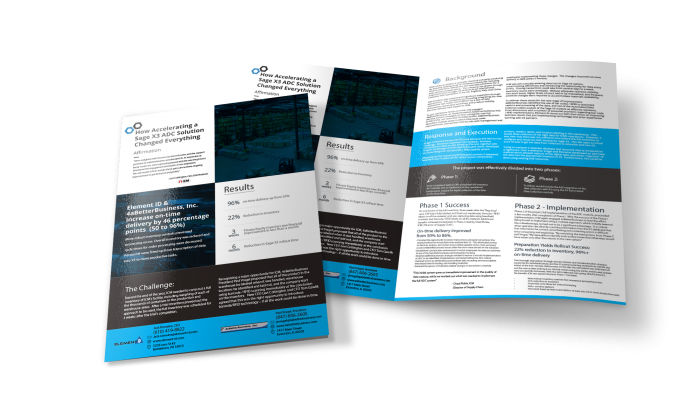 Vragel contacted Element ID CEO Jack Romaine and laid out the challenge.  Romaine responded immediately.  Romaine conducted an initial on-site survey at ICM and, together with Vragel’s knowledge of ICM’s operations and needs, developed an initial design for the barcode / RFID-capable system.

Mapping out the overall implementation process, it appeared feasible to put in place all the infrastructure components – printers, readers, labels, and location labeling in the warehouse.  This would allow collection of the right data for ICM’s operations.  However, it was clear that there was not sufficient time before the full inventory to configure and install the ADC module for Sage X3.  This left open a critical issue of how to get the data from collection to retention and into X3.

Trying to maintain a separate database and reconcile that to X3 would be a nightmare. Over a weekend, Vragel and Romaine developed an alternate method which allowed capture of the digital data, and direct “injection” of the data into the appropriate locations in X3.  Furthermore, this could be done using existing ICM resources.

4aBetterBusiness led the efforts for ICM, determining the processes that needed to be in place to capture data on ICM’s operations and how those transactions would be defined in the system, labeling of warehouse locations and development and delivery of operator training.  Capture processes were developed, tested, and documented.  Operator training was developed and operators were trained in use of the system.

According to Jack Romaine from Element ID, “Technology is only a part of the total solution in these types of projects.  The human element is often your biggest risk.  Paul Vragel of 4aBetterBusiness was a critical part of the solution by assuring success through understanding the existing process, training the operators, and getting the “buy-in” at all tiers of the company to assure the system would be used”.

Additional benefits achieved immediately in Phase I cited by Pickle:

Phase 2 of the project, full implementation of the ADC module, proceeded a few months after completion of Phase I.  With the success of the Phase I implementation, ICM again engaged 4aBetterBusiness to lead the effort.

Being forced to implement using a 2-phase approach, which initially seemed like a disadvantage, turned out to be a significant advantage.  It is critical when operators are directly scanning information into the X3 database that that information be correct, since finding and correcting errors is difficult, time-consuming and expensive.  “By reviewing the transactions from Phase I”, said Vragel, “We were able to identify and resolve issues that otherwise would have arisen only after the cutover to the new system.”

The thorough preparation through process reviews and implementation changes supported by 4aBetterBusiness and the X3 partner paid big dividends to ICM for the rollout of the ADC module.

Before noon on the day the old system was switched off and the new system switched on, the first orders using the entire, end-to-end system were being successfully processed.

With the data captured now going directly into X3, the benefits ICM saw beyond those in Phase 1 included: